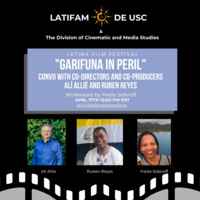 LatiFAM will host a Watch Party on Amazon Prime. RSVP for more info.

Run time: 98 mins. We encourage you to watch the documentary before the conversation and join us at 12 pm for the panel with the co-directors and co-producers and Freda Sideroff. This event is co-sponsored by the SCA Division of Cinema and Media Studies Division.

Alí Allié is an independent filmmaker and cinematographer living in Los Angeles. After graduating from California Institute of the Arts, he produced and directed the first dramatic feature film relating to Garifuna culture and spirituality, El Espíritu de mi Mamá (Spirit of my Mother) which was filmed in Honduras and won awards at film festivals worldwide. Alí’s technical experience as a cinematographer and editor combined with his anomalous insight into Garifuna culture create a unique mix. More recently, he co-produced and co-directed the feature film Garifuna in Peril with Ruben Reyes and continues to work with Reyes developing future Garifuna-related film projects.

Ruben Reyes was born in the City of Tela, Atlantida, Honduras. At age nine, his parents moved to the Garifuna village of El Triunfo de la Cruz where he began to learn and speak the Garifuna language.

Currently, he is working on his next book 201 Conjugated Verbs, in three languages: Garifuna, English, and Spanish. The book will be published in the near future. (Visit Garifuna Museum of Los Angeles)

Mrs. Freda Sideroff was born in Punta Gorda Toledo District, Belize to Rosenda and Guadalupe Paulino. She was later raised in Punta Gorda Town during her formative years and moved to Los Angeles, California in 1978. She is a wife, mother, grandmother, businesswoman, Producer, Director, filmmaker, writer and humanitarian who is currently a student at the University of Southern California (USC) for Creative Writing.

Since her stay in Los Angeles, Mrs. Sideroff has built and maintained a strong relationship with the Consulate of Belize in Los Angeles. She recently served as one of the sponsors and speakers at the September 10th Celebrations and continues to serve as the President and Founder of the critically acclaimed Garifuna International Film Festival in its 10th year. Freda Sideroff’s focus has been to enlighten, educate, and give voice to the Garifuna culture, paying homage by including indigenous cultures of all nations.

In 2012, the first year of the GIIFF, a proclamation was issued proclaiming May 26th "Garifuna Film Day" in the city of Los Angeles & State of California, signed by former Mayor Antonio Villaregosa and his council members.

Mrs. Freda is also the Director and Producer, along with her husband, of the documentary titled Blessed by Blood and of the Harrington Trapp’s soon-to-be-released Christmas CD. She is currently in the process of writing her first book of poetry and invites the community to submit their art, films and documentaries to the 10th annual GIIFF. Thanks to individuals like Mrs. Freda Sideroff, the knowledge of Belize’s richness in culture and diversity has been promoted in the US and the world.

This event is LatiFAM's FIRST Film Festival! Follow @latifamdeusc on social media and visit our website https://latifamdeusc.wixsite.com/latifam/filmfestival2021 for more info on the Festival events and featured filmmakers! (Website Tip: Reset your desktop browser page’s zoom (magnify) settings to 90% -100% (CTL and -/+ ) for best viewing)

Direct questions and concerns to latifamdeusc@gmail.com