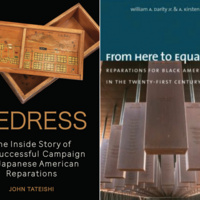 A conversation between former national JACL Executive Director John Tateishi (author of Redress: The Inside Story of the Successful Campaign for Japanese American Reparations — Heyday, 2020) and Duke University Professor William Darity and Independent Scholar A. Kirsten Mullen (co-authors of From Here to Equality: Reparations for Black Americans in the Twenty-First Century — UNC Press, 2020). The conversation will be introduced by Duncan Ryuken Williams (USC Ito Center) and moderated by Susan Kamei (USC).  This event is brought to you by the Ito Center in partnership with Densho, the Japanese American National Museum, and Tsuru for Solidarity and is part of the Ito Center Black + Japanese American Reparations event series and book club.

Please note that the event will start at 4 PM PST

Bios
Panel:
William A. (“Sandy”) Darity Jr. is the Samuel DuBois Cook Professor of Public Policy, African and African American Studies, and Economics and the director of the Samuel DuBois Cook Center on Social Equity at Duke University. He has served as chair of the Department of African and African American Studies and was the founding director of the Research Network on Racial and Ethnic Inequality at Duke. Darity’s research focuses on inequality by race, class and ethnicity, stratification economics, schooling and the racial achievement gap, North-South theories of trade and development, skin shade and labor market outcomes, the economics of reparations, the Atlantic slave trade and the Industrial Revolution, the history of economics, and the social psychological effects of exposure to unemployment. He and A. Kirsten Mullen are the authors of the recent publication, From Here to Equality: Reparations for Black Americans in the Twenty-First Century (2020).

A. Kirsten Mullen is a folklorist and the founder of Artefactual, an arts-consulting practice, and Carolina Circuit Writers, a literary consortium that brings expressive writers of color to the Carolinas. She was a member of the Freelon Adjaye Bond concept development team that was awarded the Smithsonian Institution’s commission to design the National Museum of African American History and Culture. Under the auspices of the North Carolina Arts Council she worked to expand the Coastal Folklife Survey. As a faculty member with the Community Folklife Documentation Institute, she trained students to research and record the state’s African American music heritage. Kirsten was a consultant on the North Carolina Museum of History’s “North Carolina Legends” and “Civil Rights” exhibition projects. Her writing in museum catalogs, journals, and in commercial media includes “Black Culture and History Matter” (The American Prospect), which examines the politics of funding black cultural institutions. She and William A. Darity, Jr. are the authors of From Here to Equality: Reparations for Black Americans in the Twenty-first Century (University of North Carolina Press, 2020).

John Tateishi was almost three years old when he and his family were forcibly removed from their home in Los Angeles and imprisoned at Manzanar, one of ten American-style concentration camps in which the entire Japanese American population was incarcerated during WWII.

In 1978, he launched the JACL’s redress campaign and directed the public affairs and legislative strategies of the campaign until 1986, two years before the campaign ultimately culminated with the signing of the Civil Liberties Act.  Ten years later, as the JACL’s National Director, he brought the JACL onto the national stage after 9/11 as an important national voice challenging the Bush administration’s policies that targeted Arab and Muslim communities and undermined the civil liberties of all Americans.

He was a Senior Fellow at the UCLA School of Public Policy and Social Research for the 2001-2002 academic year, and is a former trustee of UC Merced, the newest campus of the University of California.  He is the 2007 recipient of the Alice and Clifford Spendlove Prize on Social Justice.

Moderators:
Susan H. Kamei served as a volunteer in the redress campaign, including as National Deputy Legal Counsel for the Japanese American Citizens League Legislative Education Committee (JACL LEC). She currently teaches a history course at the University of Southern California (USC) on the World War II incarceration of persons of Japanese ancestry and its relevance to constitutional, political, and social issues today. Kamei is the author of the book When Can I Go Back to America: Voices of Japanese American Incarceration During World War II being published by Simon & Schuster in September 2021. She is the managing director of the USC Spatial Sciences Institute.

Duncan Ryuken Williams is Professor of Religion/American Studies & Ethnicity at the University of Southern California and Director of the USC Shinso Ito Center for Japanese Religions and Culture. Williams is the author of the LA Times bestseller American Sutra: A Story of Faith and Freedom in the Second World War (Harvard Press, 2019) about Buddhism and and the WWII Japanese American internment; The Other Side of Zen: A Social History of Sōto Zen Buddhism in Tokugawa Japan (Princeton University Press, 2005) and editor of seven books including Issei Buddhism in the Americas, American Buddhism, Hapa Japan, and Buddhism and Ecology.

This event is part of the Ito Center Black + Japanese American Reparations event series and book club. Check out "Reparations Past and Present: A Conversation with Ta-Nehisi Coates" and the full book club event webpage for more details.  All are welcome and participation is not contingent on having attended previous events. Event partners include Densho, the Japanese American National Museum, and Tsuru for Solidarity. See the full series flyer.