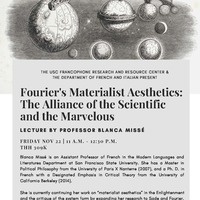 Fourier's Materialist Aesthetics: The Alliance of the Scientific and the Marvelous

A Lecture by Blanca Missé

Blanca Missé is an Assistant Professor of French in the Modern Languages and
Literatures Department at San Francisco State University. She has a Master in
Political Philosophy from the University of Paris X Nanterre (2007), and a Ph. D. in French with a Designated Emphasis in Critical Theory from the University of
California Berkeley (2014). She is currently continuing her work on “materialist aesthetics” in the Enlightenment and the critique of the system form by expanding her research to Sade and Fourier.

Department
French and Italian
Add this to your calendar