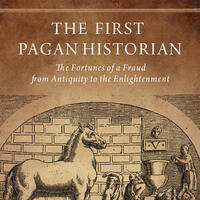 The First Pagan Historian traces the reception history of a text that is now largely neglected but once occupied a central role in the ancient canon—the History of the Destruction of Troy of one Dares the Phrygian. Although Dares claimed to have been an eyewitness observer of the Trojan War, in reality he was an ingenious forger, who mimicked the tropes of ancient historiography and fabricated his connection with the remote past. Through the Middle Ages, the Renaissance, and the Enlightenment, I chart the surprising twists and turns in the afterlife of an author long labeled the first of the pagans to write history. In this talk I will highlight some of the principal episodes and arguments of the book. In particular, I examine the subversive challenge that Dares posed to other ancient canonical traditions (especially Virgil), and the manner in which Dares’ bold rewriting of the Troy story enabled centuries of readers—both premodern and modern—to reimagine the relationship between fact and myth, history and fiction.

Professor Clark (Classics, USC) is a cultural and intellectual historian who specializes in the afterlife of classical antiquity in medieval and early modern Europe. His research examines how the reception of the ancient past has informed—and continues to inform—practices of humanistic scholarship. His book on the first pagan historian is coming up with Oxford University Press later this fall.

Department
Center for the Premodern World
Add this to your calendar