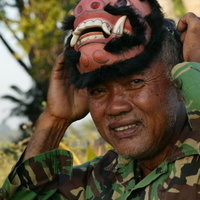 Join USC PAM for a special screening of Shadows and Illuminations, a documentary film about Nyoman Kereta, a rural Balinese man in his late sixties, who is haunted by the spirit world.

Dr. Robert Lemelson, director and producer, will lead a short Q and A following the screening.

Shadows and Illuminations is part of the "Afflictions: Culture and Mental Illness in Indonesia" film series. The film follows an older Balinese man, Nyoman Kereta, as he struggles with the intrusion of spirits into his consciousness. Kereta says he has been living in two worlds, the world of his family and community and the world of the spirits, for the past 40 years. His experiences skirt the borders of cultural and spiritual norms, simultaneously manifesting and exceeding Balinese beliefs about the supernatural world and the possibilities for human interaction with it. Kereta’s reported experiences seem credible or explicable to some, bizarre and extraordinary to others, enigmatic or doubtful to his wife, and the sign of major mental illness to his psychiatrist. The film documents his painful history of trauma, loss and poisoning, and draws on his other family member’s interpretations of how to understand his struggles and distress. Central questions of how to interpret his experiences, and what role a schizophrenia diagnosis entails are explored.

Robert Lemelson is a cultural anthropologist, ethnographic filmmaker, and philanthropist. He is an adjunct professor of Anthropology at UCLA. He has conducted visual psychological anthropology research in Indonesia for over 25 years. He has directed and produced over a dozen ethnographic films on a wide range of topics including mental illness, genocide, the sex trade, kinship, ritual, trance and possession, among others. He is the author of "Afflictions: Steps Towards a Visual Psychological Anthropology" and "Widening the Frame with Visual Psychological Anthropology: Perspectives on Trauma, Gendered Violence, and Stigma in Indonesia". He is currently working on a book exploring autism in Indonesia through the lens of visual psychological anthropology. View his work at elementalproductions.org.