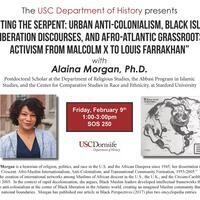 Alaina Morgan is a historian of religion, politics, and race in the U.S. and the African Diaspora since 1945; her dissertation is titled “Atlantic Crescent: Afro-Muslim Internationalism, Anti-Colonialism, and Transnational Community Formation, 1955-2005.”  In it, she explores the creation of international networks among Muslims of African descent in the U.S., the U.K., and the Circum-Caribbean from 1955 until 2005.  In the context of rapid decolonization, she argues, Black Muslim leaders developed intellectual frameworks that linked Islam with anti-colonialism at the center of Black liberation in the Atlantic world, creating an imagined Muslim community that rejected national boundaries.  Morgan has published one article in Black Perspectives (2017) plus two encyclopedia entries.