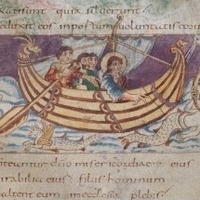 Empire Surrounded by Seas: Carolingian Images and Perceptions of the Sea

Description: The Carolingian empire of the eighth and ninth centuries has traditionally been studied as a polity based essentially on the lands over which kings and emperors ruled. However, some excellent recent work has treated the empire as one which was situated in maritime networks of people, goods and information, as a kingdom connected to the outside world by the Mediterranean, the Atlantic Ocean, and the North Sea. The study of these networks are revealing, but little work has been done on the ways that people living in that empire and shaping this network perceived the maritime world(s) around them (and further away) or how they place their empire in the maritime network. This paper offers textual study of images and perceptions of seas and maritime worlds of the eighth and ninth century and pays particular attention to the ways different seas are imagined. It represents part of an ongoing project funded by the Japan Society for the Promotion of Science (JSPS) “Maritime Networks, Islands, and Political Powers in Premodern Europe” (KAKENHI 19H00546, 2019-2024).

About the speaker: Shigeto Kikuchi is Associate Professor in the Department of History, Aoyama Gakuin University, Tokyo/Japan. He is Co-Investigator on the “Maritime Networks, Islands, and Political Powers in Premodern Europe” project and Principal Investigator of another project international funded by JSPS: “The formation and transformation of European legal culture(s): Contextualizing normative sources from the Frankish period (5th-10th century)” (KAKENHI 19KK0014, 2019-2024). His book on missi dominici of Carolingian rulers (Herrschaft, Delegation und Kommunikation in der Karolingerzeit. Untersuchungen zu den Missi dominici (751-888)) is forthcoming.