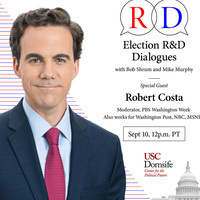 Robert Costa, moderator of PBS's "Washington Week" and political analyst at NBC News and MSNBC, joined CPF co-directors and veteran Democratic and Republican strategists Bob Shrum and Mike Murphy to share his insights on the 2020 presidential election, including where this race stands.

The discussion was livestreamed on the CPF Facebook page. For questions, email cpf@usc.edu.

In partnership with the USC Dornsife College of Letters, Arts and Sciences, CPF is hosting a series of online discussions titled “Election R&D Dialogues” on the 2020 presidential election. Drawing on their own experiences, and sometimes with a prominent guest, CPF co-directors Bob Shrum and Mike Murphy will host a series of engaging conversations true to the Center’s defining mission: To respect each other and respect the truth.