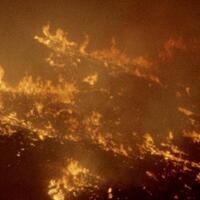 An immersive and enthralling journey through the Sonoran Desert on the U.S.-Mexico border, EL MAR LA MAR weaves together harrowing oral histories from the area with hand-processed 16mm images of flora, fauna and items left behind by travelers. Subjects speak of intense, mythic experiences in the desert: A man tells of a fifteen-foot-tall monster said to haunt the region, while a border patrolman spins a similarly bizarre tale of man versus beast. A sonically rich soundtrack adds to the eerie atmosphere as the call of birds and other nocturnal noises invisibly populate the austere landscape.

Emerging from the ethos of Harvard’s Sensory Ethnography Lab, J.P. Sniadecki’s attentive documentary approach mixes perfectly with Joshua Bonnetta’s meditations on the materiality of film. Together, they’ve created an experience of the border region like nothing you’ve seen, heard or felt before.

J.P. Sniadecki (b. 1979) works between China and the United States as an artist and anthropologist whose films explore collective experience, sensory ethnography, and the possibilities of cinema. His work is in the permanent collection of New York's Museum of Modern Art and the San Francisco Museum of Modern Art and has been exhibited at the Shanghai Biennale, the Whitney Biennale, the Shenzhen Biennale, the Centre George Pompidou and the Guggenheim, as well as at international film festivals, such as Berlin, BFI London, Locarno, New York, AFI, Viennale, Mar del Plata, and Beijing Independent Film Festival. Co-founder of the traveling screening series "Cinema on the Edge," which showcases independent Chinese film, he has written articles for Cinema Scope and Visual Anthropology Review and the edited volume DV-Made China. A 2017 Guggenheim Fellow, he currently teaches in the Documentary Media MFA program at Northwestern University.