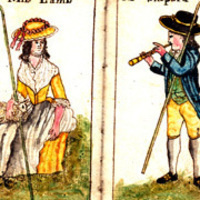 "'Multiplying in the World’: Fertility and the
Early Modern English Home"

In 1650 the Earl of Northampton wrote to Richard 5th Earl of Dorset stating that he was ‘extreamly glad to heare that still wee are likely to have more of y[ou]r breede by my most fertill Mistress'. He added that Richard's wife, Frances, 'still continueth her vertuous qualitie of Multiplying in the world'. Fertility and conception were of the utmost concern to seventeenth-century wives and husbands, as the earls' correspondence reveals. Historians, however, have often characterised fertility as a female medical concern. Through an analysis of correspondence, life-writing and doctors' casebooks, this paper will interrogate the gendered meanings of fertility and the ways in which individuals sought to make their household more procreative.

Leah Astbury is the Molina Fellow in the History of Medicine & Allied Sciences. She received her PhD from the University of Cambridge in 2016. Since, she has held an AHRC Cultural Engagement Fellowship and in the 2016/17 academic year held a Society of Renaissance Studies Postdoctoral Fellowship and Women in Humanities Fellowship at The Oxford Research Centre in the Humanities (TORCH). In 2018 she will return to Cambridge to take up a Wellcome Trust Postdoctoral Fellowship.