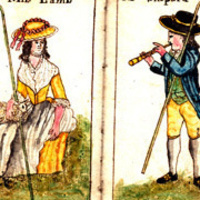 "Blood and Trees: Ancestry and Genealogy in England's Long Reformation"

This lecture explores ancestry and genealogy in England's long Reformation. While the fascination of the Tudor and Stuart elite with questions of lineage, birth and descent has received much attention, its connection with the religious impulses and upheavals of the era has been comparatively neglected. Arguing that the biological and spiritual, dynastic and confessional dimensions of this enterprise must be assessed in tandem, the lecture investigates the interweaving of biblical, secular and polemical genealogy and suggests that genealogical thinking stretched much further downwards in English society than historians have hitherto recognised. In the process, it seeks to illuminate contemporary assumptions about sex and original sin, pregnancy and childbirth, race and heredity. A further aim is to underscore the value of writing a social and cultural history of religion with the theology put back.

Alexandra Walsham is Professor of Modern History at the University of Cambridge and a Fellow of Trinity College and the British Academy. She has published widely on the religious and cultural history of early modern Britain and her recent books include The Reformation of the Landscape: Religion, Identity and Memory in Early Modern Britain and Ireland, which was joint winner of the Wolfson History Prize. She currently holds a Leverhulme Major Research Fellowship to work on 'The Reformation of the Generations: Age, Ancestry and Memory in England, c.1500-1700', and is Principal Investigator of the AHRC funded project, 'Remembering the Reformation', based at the Universities of Cambridge and York.