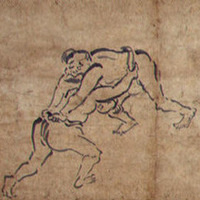 Nadia Kanagawa- Leveraging the Limitations of Immigrant Descent in Nara Japan: The Life and Times of Takakura no Fukushin

The story of one eighth century individual - Takakura no Fukushin - is the focus of this talk, which explores both the limitations and the possibilities of immigrant descent in the Nara-period court. Fukushin was born Sena no Fukushin in Musashi Province in the eastern part of Japan. His grandfather was reportedly from Koguryŏ, a kingdom on the Korean peninsula, but he fled the Tang invasion and crossed over in the late 660s, where he became a subject of the Yamato and was settled in Musashi. As a young man, Fukushin’s talent as a sumo wrestler brought him to the attention of the sovereign. He was summoned to the capital and entered officialdom, rising from palace guard, to the crown prince’s household, and finally to the concurrent positions of Director of the Board of Censors and governor of Musashi province. By the time of his death at age 81 in 789 CE, Fukushin had risen to the Junior Third Rank, a rare achievement for a Nara official. Fukushin was without doubt a remarkably talented and lucky official - his career spanned the reigns of five sovereigns (representing two dynasties) and survived numerous rebellions. Applying a microhistorical approach to Fukushin’s life offers insight into the range of possibilities available to subjects of immigrant descent who sought to navigate the court to their best advantage.

Bio
Nadia Kanagawa is an Assistant Professor of Asian Studies and History at Furman University in Greenville, SC. She researches how the seventh- through ninth-century Japanese rulers approached the incorporation, assimilation and configuration of immigrants and their descendants. She is the author of “East Asia’s First World War, 643-668,” in East Asia in the World: Twelve Events That Shaped the Modern International Order, and “Approach and Be Transformed: Immigrants in the Nara and Heian State” in Hapa Japan: Constructing Global Mixed Race and Mixed Roots Japanese Identities and Representations. She is currently completing a manuscript, "Transforming the People: Foreign Subjects in Seventh- Through Ninth-Century Japan."