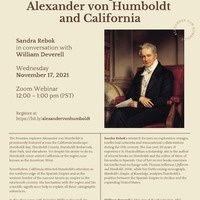 The Prussian explorer Alexander von Humboldt is prominently featured across the California landscape: Humboldt Bay, Humboldt County, Humboldt Redwoods State Park, and elsewhere.  Yet despite his desire to do so, Humboldt never visited California or the region now known as the American West.

Nonetheless, California attracted Humboldt’s attention as the northern edge of the Spanish Empire and as the western border of the nascent American empire in the nineteenth century.  His fascination with the region and his scientific significance help to explain all these cartographic references.

In this discussion with historian William Deverell, Dr. Sandra Rebok will offer scholarly perspective on Humboldt´s abiding and long-term interest in California, as well as California’s interest in Humboldt.

Go to https://bit.ly/alexandervonhumboldt to register.