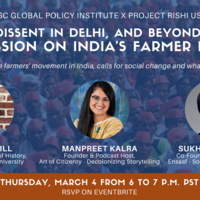 Dissent in Delhi and Beyond: A Discussion on India's Farmer Protests

Join the USC Global Policy Institute for an expert panel on the farmers' movement in India, calls for social change and what comes next.

The USC Global Policy Institute is excited to welcome three distinguished speakers for a panel on India's mass farmer protests.

Farmers in India have abandoned the fields to demonstrate in one of the country's biggest ever protests. The staged demonstrations have been ongoing since November, when the government passed a series of agriculture laws in September. Farmers believe these reforms will devastate their livelihoods, despite being touted as measures to modernize the agricultural industry. The peaceful protests have been met with violence and crackdown from the government.

Join GPI in welcoming William Patterson University Assistant Professor Navyug Gill, Art of Citizenry Founder Manpreet Kalra and Ensaaf Co-Founder and Co-Director Sukhman Dhami in a discussion on the protests, their significance, social change in India and what comes next. Read more about our panelists below.

Zoom link will be emailed prior to the event.

Navyug Gill is a scholar of modern South Asia and global history. He is Assistant Professor in the Department of History at William Paterson University. His research lies at the intersection of agrarian studies, labor history, postcolonial critique and global capitalism. Currently he is completing a book manuscript on caste politics and the emergence of the peasant in colonial Panjab. His academic and popular writings have appeared in venues such as the Journal of Asian Studies, Economic and Political Weekly, Outlook, Al Jazeera, Law and Political Economy Project and Trolley Times.

Manpreet Kalra (she/her) is a social impact advisor, educator, speaker, podcast host, and activist working to decolonize ethical storytelling. She navigates the intersection of impact communication and sustainable global development. Her activism focuses on the interconnectivity of economic, social, and climate justice. She educates using a variety of mediums, including the Art of Citizenry Podcast, where she shares her nuanced and unfiltered insights on building a more just and equitable future. Her work unpacks history and addresses systemic power structures. She serves on the board of the NYC Fair Trade Coalition and co-established the Justice Equity Diversity and Inclusion Committee of the Fair Trade Federation.

Sukhman Dhami is the Co-Founder and Co-Director of Ensaaf (2004), a human rights organization that works to end impunity and achieve justice for crimes against humanity in India, with a special focus on Punjab. Sukhman was the recipient of the 2004 Unity Award from the San Francisco Coalition of Minority Bars and South Asian Bar Association for his outstanding service to the legal community. He is a 2006 Echoing Green fellow, and also received a two-year fellowship through the Ford Foundation to work with the Center for Justice & Accountability. Sukhman has published several articles and reports on human rights in India with The Hill, Christian Science Monitor, Human Rights Watch, and The Public International Law & Policy Group, where he also serves on the Advisory Board. He earned his J.D. and M.A. from the American University.

RSVP here to receive a Zoom link on the day of:

Department
Politics and International Relations (POIR)
Add this to your calendar