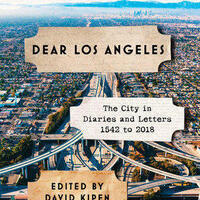 with David Kipen and Lynell George

Join David Kipen and Lynell George as they discuss and read a few letters from Dear Los Angeles.

The City of Angels has played a distinct role in the hearts, minds, and imaginations of millions of people, who see it as the ultimate symbol of the American Dream. David Kipen, a cultural historian and avid student of Los Angeles, has scoured libraries, archives, and private estates to assemble a kaleidoscopic view of a truly unique city. From the Spanish missionary expeditions in the early 1500s to the Golden Age of Hollywood to the strange new world of social media, the collection of letters in Dear Los Angeles is a slice of life in L.A. through the years. The pieces are arranged by date—January 1st to December 31st—featuring selections from different decades and centuries. What emerges is a vivid tapestry of insights, personal discoveries, and wry observations that together distill the essence of the city.

David Kipen is the former literature director of the National Endowment for the Arts, and currently serves as book critic for Los Angeles Magazine and critic-at-large for the Los Angeles Times and teaches in the writing program at UCLA. Born and raised in Los Angeles, Kipen opened the Boyle Heights bookstore and lending library Libros Schmibros in 2010. The former book editor/critic of the San Francisco Chronicle and contributor to multiple volumes of California cultural history, Kipen holds a degree in literature from Yale University.

Lynell George is a Los Angeles-based journalist and essayist. She is the author of No Crystal Stair African Americans in the City of Angels and After/Image: Los Angeles Outside the Frame, a collection of her essays and photographs. She won a 2018 GRAMMY for liner notes for “Otis Redding Live at the Whisky A Go Go.”