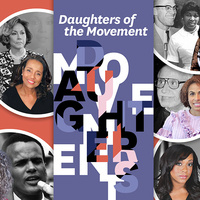 Daughters of the Movement

DESCRIPTION:
The Daughters of the Movement are legacy holders—a remarkable group of women who sat at the feet of those who were on the frontlines of the Civil Rights Movement:

The Daughters carry the oral history, cultural values, and wisdom passed down to them by revolutionary leaders who turned the tide of American history. Their memories about growing up and watching their parents at work overlap and intertwine, as did the lives of their parents—civil rights activists, artists, politicians, political strategists, religious leaders, and funders of the Movement. In an inspiring live conversation moderated by Kim Tabari, organizational development director of the USC Equity Research Institute, this multigenerational sisterhood will share their stories in order to empower and activate future generations.

About the Panelists:
Gina Belafonte is an actress, director, award-winning producer, and artivist. She is the Executive Director of Sankofa.org, a social justice organization that educates, motivates, and activates artists and allies in the service of grassroots movements and equitable change.

Suzanne Kay is a writer and filmmaker currently working on a documentary about her mother, the late actress Diahann Carroll. The producer and co-writer of the award-winning feature film Cape of Good Hope contributes to Huffington Post and writes a blog on race at suzannekaystory.com.

Stacy Lynch is running for NYC Council in the 7th District to bring greater equality to government and to heal the division and wounds in her city. As former Deputy Director in the Mayor’s Office of Intergovernmental Affairs, Stacy managed First Lady Chirlane McCray’s public affairs and the Mayor’s interaction with external government agencies and key community stakeholders.

Hasna Muhammad is a visual artist, writer, and educator whose work focuses on family, social justice, and the human condition. She provides preparation for executive leadership, diversity management, and community engagement in order to diversify educational and political leadership.

Ilyasah Shabazz is an award-winning author, speaker, and educator. She is an adjunct professor at John Jay College of Criminal Justice in New York City where she emphasizes empowerment and inclusion in her teaching. She also works to preserve her parents’ legacies through the Malcolm X and Dr. Betty Shabazz Memorial and Educational Center.

Dominique Sharpton is an actress, producer, and activist. As the National Director of Membership for National Action Network, one of the nation’s leading civil rights organizations, Dominique activates and engages the next generation and impacts systemic change through local community development.

Keisha Sutton-James is a consultant who works with clients in political, media, activist, and corporate diversity spaces to ensure that people of color are represented in all of society’s corridors of power. She is currently producing PERCY100, a year of events and activations around the legacy of her grandfather, Percy Sutton.

Kim Tabari (moderator) is the organizational development director of the USC Equity Research Institute. She holds a doctorate degree in Educational Leadership from California State University, Long Beach, and has worked at a variety of institutions both public and private. Her research training using qualitative methodology is in students of color, in particular, African American males persisting through higher education.

Presented by USC Visions and Voices: The Arts and Humanities Initiative in partnership with the Institute for Theatre and Social Change at the USC School of Dramatic Arts. Co-sponsored by the USC Equity Research Institute, the Center for Black Cultural Student Affairs, the Black Student Assembly, Brothers Breaking B.R.E.A.D., and the Student Assembly for Gender Empowerment.