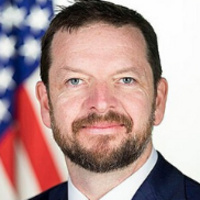 Joseph Grogan served as assistant to President Donald J. Trump and director of the United States Domestic Policy Council. He was the President’s lead advisor on a variety of domestic policy issues relating to health care, regulatory and deregulatory initiatives, economic expansion, commercial space exploration, environment, agriculture, civil rights and education. As a health policy thought leader, he has played a key role in the health sector’s most consequential debates of the last decade.  Mr. Grogan was also a member of the White House’s COVID-19 Task Force, where he worked with Executive Branch officials to respond to the COVID-19 public health emergency.

During his time as Director of the Domestic Policy Council, Mr. Grogan led a White House team that directed the focus and attention of all major policy initiatives, including the development of regulations, Executive Orders, Presidential Decision Memorandums and major Presidential announcements. Notably, Mr. Grogan negotiated provisions of the 2020 Omnibus Spending Bill with Congressional leadership and members which eliminated a number of significant health care taxes.

Before serving as Director of the Domestic Policy Council, Mr. Grogan was Associate Director for Health Programs at the Office of Management and Budget. During his tenure at the Office of Management and Budget, Mr. Grogan was responsible for overseeing all domestic health spending, totaling $1.3 trillion per year. In the George W. Bush Administration, he served as Senior Advisor to the Commissioner at the Food and Drug Administration. In the private sector, Mr. Grogan led the Washington Office for Gilead Sciences; and worked at Amgen and the Marwood Group.

Mr. Grogan is the author of numerous opinion pieces on prescription drug pricing, mental health, school choice programs, surprise medical billing, and Medicare spending. He holds a Juris Doctor from William and Mary School of Law and a Bachelor of Arts from the State University of New York at Albany.