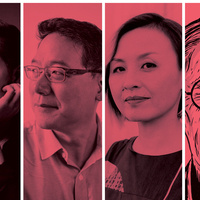 DESCRIPTION:
Join us for a reading and conversation with four outstanding Chinese writers whose works upend the notion of a monolithic Chinese identity and uncover a much more complicated story about the diversity of Chinese diasporic experiences in America: 2017 National Book Award finalist Lisa Ko (The Leavers), crime-writer-turned-YA-author Ed Lin (David Tung Can’t Have a Girlfriend Until He Gets into an Ivy League College), Smithsonian Ingenuity Award–recipient Mimi Lok (Last of Her Name), and Max Yeh (Stolen Oranges), whom E.L. Doctorow describes as "a writer on a rampage."

Characters in the panelists’ recent books include an undocumented single mother who gets deported—leaving her eleven-year-old son behind; a sixteen-year-old boy whose social life revolves around weekend Chinese school in New York City’s Chinatown; a kung fu–fighting teenage girl in England; a homeless granny roaming the streets of Japan; and seventeenth-century Chinese emperor Wanli, who corresponds across the world with Cervantes, the author of Don Quixote.