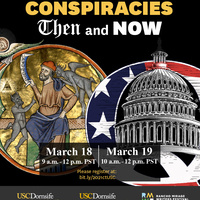 Conspiracies Then and Now - Day 2

Conspiracy theories have captured the attention of people throughout history, and they have become especially influential in current politics. Some recent conspiracists have deliberately adopted the language of the Middle Ages to advance their agenda. In this conference we will break down the history of conspiracy theories dating back to the Middle Ages and compare them to contemporary beliefs. We’ll also discuss how the Deep State and QAnon theories influenced political messaging in the age of Trump. Each panel will conclude with an audience Q&A.

The Templars were accused of worshipping Satan, witchcraft, and sodomy. They were one of the Latin West's most trusted institutions, and then suddenly were condemned and accused of sodomy, witchcraft, and Satan worship, among other sins. Modern observers will explore how similar trends target America’s civic institutions, drawing on events from McCarthyism to the Kennedy assassination to 9/11.

Apocalypse doesn't just mean destruction. It can also mean a world remade—peaceful, prosperous, but born of social upheaval and torrential bloodshed. This panel will discuss these aspects of Apocalyptic and Millenarian cults in the Middle Ages and compare them to modern religious extremism and the contemporary conspiratorial mindset from Y2K to QAnon.

This discussion will be live-streamed to the CPF Facebook page. Email cpf@usc.edu for questions.