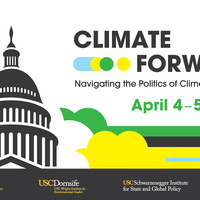 USC Dornsife Wrigley Institute for Environmental Studies partnered with the USC Dornsife Center for the Political Future and USC Price Schwarzenegger Institute for a conference titled "Climate Forward: Navigating the Politics of Climate Change" on April 4, 2019 at the University of Southern California.

The purpose was not to discuss the overwhelming scientific evidence or to reinforce the scientific consensus on this issue. Instead, our goal was to bring academics, scientists, journalists, and political practitioners together to examine the challenges to making political progress in addressing climate change, and to explore measures that governments at every level, the international community, and the private sector, can successfully take to mitigate the effects of climate change, despite current political obstacles.

View all photos from the conference here.

Former U.S. Secretary of State John Kerry delivered a keynote address on the politics of climate change at Bovard Auditorium.  An architect of the Paris Climate Accord, Secretary Kerry shared his experience negotiating global action on this issue and his vision for future progress.

10:30 a.m. to 11:50 a.m. "The Political Climate" (watch video )
This panel addressed the political climate surrounding this issue and the political, economic and cultural barriers to achieving proactive climate change solutions.

1:00 p.m. to 2:20 p.m. "Global Action" (watch video)
This panel examined politically realistic solutions to climate change that nations across the world can take, should take and are taking to mitigate climate change and its impact.

2:30 p.m. to 3:50 p.m. "States and Cities" (watch video)
This panel explored what can be feasibly achieved in the U.S. by states and cities acting on their own and in cooperation with each other, and how these efforts can advance change at a broader level.

4:00 p.m. to 5:20 p.m. "Private Sector Solutions" (watch video)
This panel explored the role of the private sector in responding to climate change, and will explore potential economic gains from and incentives for environmentally responsible actions.