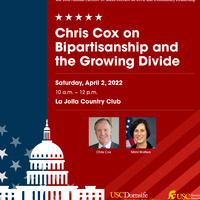 Chris Cox on Bipartisanship and the Growing Divide

Interviewing Chris Cox will be another leader in bipartisanship, former U.S. Representative and former USC Center for the Political Future Fellow, Mimi Walters.

Join us in-person at the La Jolla Country Club or virtually via Zoom for a discussion on our increasing partisan divisions across America and how to bridge the growing divide.

The Herbert G. Klein Lecture on Civic and Community Leadership was established by the USC Dornsife College of Letters, Arts and Sciences in 2006 to honor Klein's contributions to the communications field. The lecture brings distinguished leaders from a wide spectrum of disciplines to speak on the subjects of civic leadership, community activism and political participation to current and prospective students, alumni and friends of USC.

CLICK HERE to watch the video for "Chris Cox on Bipartisanship and the Growing Divide."

Department
Center for the Political Future , Dornsife Alumni
Add this to your calendar