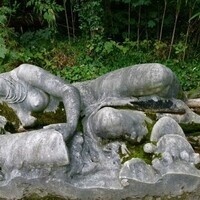 Charles Forsdick will study the Parisian colonial exhibitions of 1907 and 1931 in the light of his recent work on postcolonial realms of memory. He will explore the role of these exhibitions in popularizing empire in the early twentieth century, including a focus on the phenomenon of the 'human zoo'. The talk will address equally the afterlives of these exhibition sites, introducing the ghosts of empire still present in the ruins of the 'jardin d'agronomie tropicale' (location of the 1907 exhibition) but also examining the often-scattered remnants of the 1931 exposition at Vincennes.

Charles Forsdick is James Barrow Professor of French at the University of Liverpool. He has published on a range of subjects, including travel writing, colonial history, postcolonial and world literature, and the memorialization of slavery. His recent books include The Black Jacobins Reader  (Duke University Press, 2016), Toussaint Louverture: Black Jacobin in an Age of Revolution (Pluto, 2017), Keywords for Travel Writing Studies (Anthem Press, 2019) and Postcolonial Realms of Memory: Sites and Symbols in Modern France (Liverpool University Press, 2020). He also co-edited a special collection of Modern Languages Open on “The global crisis in memory: populism, decolonisation and how we remember in the twenty-first century” (2020).

Click here to RSVP and register for the Zoom link for this event: https://usc.zoom.us/meeting/register/tJAlfu2orjkvGN0mYrLWrc_RB26x9bmd5KQN