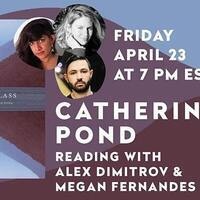 Fraught with obsession, addiction, and unrequited love, Catherine Pond’s Fieldglass immerses us in the speaker’s transition from childhood to adulthood. A queer coming-of-age, this collection is a candid exploration of sexual identity, family dynamics, and friendships that elude easy categorization, offering insight on the ambiguous nature of identity.

Catherine Pond was born in New York City. She is the author of Fieldglass (Southern Illinois University Press 2021), winner of the Crab Orchard First Book Prize. Her poems have appeared in Best New Poets, Best American Nonrequired Reading, AGNI, The Adroit Journal, Narrative, and other publications. She is a PhD candidate in Literature & Creative Writing at the University of Southern California and received her MFA from Columbia University School of the Arts in 2013. Pond lives in San Francisco.

Alex Dimitrov is the author of three books of poetry including, Love and Other Poems, Together and by Ourselves, Begging for It, and the chapbook American Boys. His poems have been published in The New Yorker, the New York Times, The Paris Review, and Poetry. He has taught writing at Princeton University, Columbia University, and New York University, among other institutions. Previously, he was the Senior Content Editor at the Academy of American Poets, where he edited the popular series Poem-a-Day and American Poets magazine. Dimitrov also founded the queer poetry salon Wilde Boys (2009-13), which brought together emerging and established writers in Manhattan’s Greenwich Village. He is the recipient of a Pushcart Prize and the Stanley Kunitz Memorial Prize from the American Poetry Review. On Twitter he writes an endless poem called “Love” in real time, one tweet a day. With Dorothea Lasky he co-founded Astro Poets and is the co-author of Astro Poets: Your Guides to the Zodiac. He was born in Sofia, Bulgaria, and lives in New York, where he’s working on a novel.

Megan Fernandes is a South Asian American writer living in New York City. She was born in Canada and moved to the Philadelphia area when she was seven. Her family are East African Goans.

Fernandes has work forthcoming or published or in The New Yorker, the American Poetry Review, Tin House, Ploughshares, Chicago Review, Boston Review, Rattle, Pank, The Common, Guernica, the Academy of American Poets, McSweeney’s Internet Tendency, among others. She is the author of The Kingdom and After (Tightrope Books 2015). Her second book of poetry, Good Boys, was a finalist for the Kundiman Book Prize (2018), the Saturnalia Book Prize (2018), and was published with Tin House Books in February 2020.

Fernandes is an Assistant Professor of English and the Writer-in-Residence at Lafayette College where she teaches courses on poetry, creative nonfiction, and critical theory. She holds a PhD in English from the University of California, Santa Barbara and an MFA in poetry from Boston University.