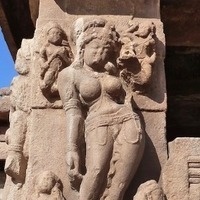 Speaker: Subhashini Kaligotla, Assistant Professor in the Department of Art History at Yale University. Her research focuses on sacred architecture—Buddhist, Hindu, and Jain—with emphasis on the ancient and medieval periods. Her forthcoming book, Shiva’s Waterfront Temples: Architects and their Audiences in Medieval India (Yale University Press, 2022), examines the creative resources of Deccan architects in dialogue with the response of their contemporary audiences. The book is an account of the shared cultural and aesthetic values that shaped built space in the medieval Deccan. A second book project, provisionally titled Seeing Ghosts, is interested in the iconographies of death and the afterlife in early Indian Ocean worlds. Kaligotla is also a practicing poet and author of the poetry collection, Bird of the Indian Subcontinent(2018).

From as early as the seventh century CE, the northern Indian rivers, Ganga and Yamuna, featured in the political discourse of peninsular Indian kings. For the imperial Chalukyas, Rashtrakutas, and Cholas, capturing Ganga and Yamuna signified at once their conquest of north India and their status as transregional powers. This lecture examines the material record—specifically, the sculptural representations of these northern rivers, who were personified as beautiful goddesses at the thresholds of Deccan temples and monasteries. Looking at wider medieval practices involving the looting of images and iconoclasm, I ask how closely Deccan river goddess imagery can be associated with the rhetoric of political violence.