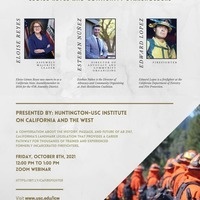 During the fire season of 2020 the prospects, hopes, and futures of California’s nearly 4,000 formerly-incarcerated firefighters were lifted with the passage of Assembly Bill 2147. Created during the Second World War, the California Conservation Camp Program has been a critical fixture of the state’s fire management apparatus. Despite their training and experience as part of California’s emergency management system, these firefighters have traditionally faced challenging career prospects with fire management agencies.

Join us for an online conversation – free and open to public and academic audiences – with Assembly Majority Leader Eloise Reyes in a conversation with community stakeholders, in recognizing the history, development, passage, and future of this landmark legislation – that provides a pathway for judicial expungement.

Go to https://bit.ly/cafirefighter to register for the webinar.