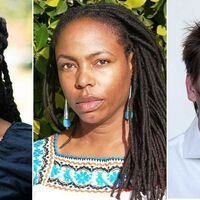 Dana Johnson’s Elsewhere, California is a vivid novel of the Golden State. Narrated by Avery Arlington, a Black artist born in South Los Angeles and raised in West Covina, it traces a number of migrations across the physical and social territory of the Southland.

Johnson knows her material—the book’s narrative follows the loose shape of her own life. But she has more than autobiography on her mind. Rather, the novel positions Avery as representative not just of Johnson but also of the entire shifting landscape of Southern California, a place made up of cities and of suburbs, where we move from childhood to the edgy pressures of adulthood and learn that who we are might be different from who we appear to be.

John Freeman will lead a free hour-long conversation with Johnson, which will include a reading by Johnson, questions from the audience, and guest Rasheeda Saka. Produced by Alta Journal for streaming on Zoom.

Dana Johnson is the author of the short story collection In the Not Quite Dark, forthcoming from Counterpoint in August 2016. She is also the author of Break Any Woman Down, winner of the Flannery O’Connor Award for Short Fiction, and the novel Elsewhere, California. Both books were nominees for the Hurston/Wright Legacy Award. Her work has appeared in The Paris Review, Callaloo, The Iowa Review and Huizache, among others, and anthologized in Watchlist: 32 Stories by Persons of Interest, Shaking the Tree: A Collection of New Fiction and Memoir by Black Women, and California Uncovered: Stories for the 21st Century. Born and raised in and around Los Angeles, she is a professor of English at the University of Southern California.

Rasheeda Saka is an assistant editor at Alta’s California Book Club. A graduate of Princeton University, she was Literary Hub’s 2020 fall-winter editorial fellow. In 2018, Saka was named one of the literary journal Epiphany’s Breakout 8 writers for her short story “The Killers’ Den.