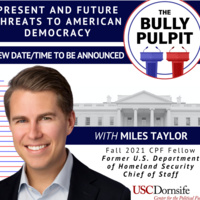 Miles Taylor, former Homeland Security official, and former presidential candidate Evan McMullin, announced a new political movement backed by more than 150 prominent conservatives shortly after the removal of Rep. Liz Cheney from GOP House Leadership, last May. It's an exploratory move toward forming a breakaway party if the Republican Party continues to align itself with Donald Trump.

Taylor is a Fall 2021 Fellow at the Center for the Political Future and joins CPF Co-Director Bob Shrum to discuss his upcoming course and his vision for the future of democracy and the Republican Party.

The former principal advisor to the Homeland Security Secretary gained national attention in 2018 after publishing an anonymous piece in the New York Times, blowing the whistle on Presidential misconduct. He later released a first-hand account of the instability inside President Trump's White House and administration in his best-selling book, "A Warning." After resigning, Taylor publicly endorsed Joe Biden in his presidential run and helped recruit an unprecedented number of former administration officials to oppose the reelection of Trump. He revealed himself to be "Anonymous" in October 2020.

CLICK HERE to register for Miles Taylor's conversation on The Bully Pulpit.

The discussion will be livestreamed on the CPF Facebook page.

Department
Campus Humanities, Center for the Political Future
Add this to your calendar