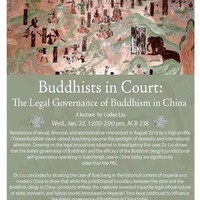 Buddhists in Court: Legal Governance of Buddhism in China

A lecture by Cuilan Liu

Revelations of sexual, financial, and administrative misconduct in August 2018 by a high-profile Chinese Buddhist monk named Xuecheng became the spotlight of domestic and international attention. Drawing on the legal procedures adopted in investigating this case, Dr. Liu shows that the state’s governance of Buddhism and the efficacy of the Buddhist clergy’s jurisdictional self-governance operating in Xuecheng’s case in China today are significantly older than the PRC.

Dr. Liu concludes by situating the case of Xuecheng in the historical context of imperial and modern China to show that while the jurisdictional boundary between the state and the Buddhist clergy in China constantly shifted, the creatively invented tripartite legal infrastructure of state, monastic, and hybrid courts introduced in imperial China have continued to influence the state's governance of Buddhism in China today.