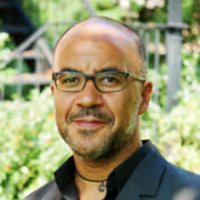 Brent Hayes Edwards will discuss his work on a bilingual edition (forthcoming in 2022 from Nouvelles Éditions Place) of the collected interwar articles and essays of Paulette Nardal, the pioneering Martinican journalist, editor, and translator who co-founded the journal La Revue du Monde Noir (1931-32), one of the periodicals often credited with creating space for the emergence of the Négritude movement. With nearly three dozen recently discovered articles that Nardal published in obscure and ephemeral publications, the new bilingual edition will greatly expand her available corpus. The project raises a host of new questions about Nardal's shifting political sensibilities and her commitments to black internationalism and feminism in the context of the French empire.

Brent Hayes Edwards is the Peng Family Professor of English and Comparative Literature at Columbia University, where he is also affiliated with the Center for Jazz Studies and the Institute for Comparative Literature and Society. He is also the Director of the Scholars-in-Residence Program at the Schomburg Center for Research in Black Culture at the New York Public Library. His books include Epistrophies: Jazz and the Literary Imagination (Harvard University Press, 2017), The Practice of Diaspora: Literature, Translation, and the Rise of Black Internationalism (Harvard University Press, 2003), the co-edited collection Uptown Conversation: The New Jazz Studies (Columbia University Press, 2004), and scholarly editions of classic works by W. E. B. Du Bois, Frederick Douglass, Joseph Conrad, and Claude McKay. His translations include Michel Leiris’s Phantom Africa (Seagull Books, 2017), for which he was awarded a PEN/Heim Translation Fund Grant. He was a 2015 Guggenheim Fellow.

This event is possible thanks to generous funding from the Departments of French and Italian, Comparative Literature, and American Studies and Ethnicity, as well as ASE’s Africana Research Cluster.