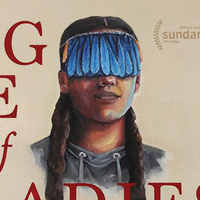 COVID-19 Protocols: Although masks are not required, per the LA County Department of Public Health, it is strongly recommended that attendees wear masks for their own protection and the protection of others.

DESCRIPTION:
Following a screening of Long Line of Ladies, which depicts a girl and her community preparing for her Ihuk, the once-dormant coming-of-age ceremony of the Karuk tribe of Northern California, directors Shaandiin Tome and Rayka Zehtabchi and producer Sam Davis will discuss their experiences working on the movie and uplifting the Native American perspective in film. Topics of conversation will include how the short film illustrates the connection between family and culture within Native communities, how various tribes across the United States celebrate rather than shame womanhood, and how tribes continue to preserve ceremonies and traditions through celebration and community.

This screening and conversation is part of the USC Native American Student Assembly’s “Breaking Native” programming series, highlighting artists who are breaking into their respective industries and re-defining what being indigenous means. By bringing attention to indigenous representation throughout the entertainment industry, celebrating the filmmakers who are leading this push, and exposing peers to inspirational Native leaders and allies, they hope to strengthen kinship among Native Trojans and the USC community.


Bios:
Shaandiin Tome (director) is a recognized Diné director and cinematographer from Albuquerque, New Mexico, whose cross-cultural experiences allow her to collaborate with other trailblazers in capturing untold stories among the indigenous community. Her breakout, award-winning short film Mud (Hasht?’ishnii) premiered at Sundance Film Festival in 2018, with foreign debut showings worldwide.

Rayka Zehtabchi (director) is a director and producer who became the first Iranian woman to win an Oscar for her NETFLIX short and documentary debut, Period. End of Sentence. Drawn to stories that prioritize heart over flash and striving for honesty and intimacy on screen, Zehtabchi brings a naturalistic approach to her storytelling.

Sam Davis (producer, director of photography) is a multifaceted filmmaker with a foundation in cinematography. Best known for producing, shooting, and editing the Oscar-winning short film Period. End of Sentence, Davis’s work has screened in competition at festivals including Sundance, SXSW, and Tribeca.

Presented by the USC Native American Student Assembly, Outside the Box (Office), and USC Visions and Voices: The Arts and Humanities Initiative.