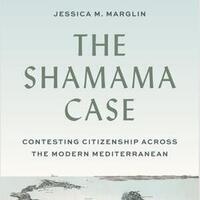 A discussion of Jessica Marglin's new book, The Shamama Case: Contesting Citizenship Across the Modern Mediterranean (Princeton University Press, 2022). Sponsored by the Center for Law, History and Culture. Co-sponsored by the Casden Institute and Levan Institute for the Humanities

About the Book:  In the winter of 1873, Nissim Shamama, a wealthy Jew from Tunisia, died suddenly in his palazzo in Livorno, Italy. His passing initiated a fierce lawsuit over his large estate. Before Shamama’s riches could be disbursed among his aspiring heirs, Italian courts had to decide which law to apply to his estate—a matter that depended on his nationality. Was he an Italian citizen? A subject of the Bey of Tunis? Had he become stateless? Or was his Jewishness also his nationality? Tracing a decade-long legal battle involving Jews, Muslims, and Christians from both sides of the Mediterranean, The Shamama Case offers a riveting history of citizenship across regional, cultural, and political borders.

On its face, the crux of the lawsuit seemed simple: To which state did Shamama belong when he died? But the case produced hundreds of pages in legal briefs and thousands of dollars in lawyers’ fees before the man’s estate could be distributed among his quarrelsome heirs. Jessica Marglin follows the unfolding of events, from Shamama’s rise to power in Tunis and his self-imposed exile in France, to his untimely death in Livorno and the clashing visions of nationality advanced during the lawsuit. Marglin brings to life a Dickensian array of individuals involved in the case: family members who hoped to inherit the estate; Tunisian government officials; an Algerian Jewish fixer; rabbis in Palestine, Tunisia, and Livorno; and some of Italy’s most famous legal minds.

Drawing from a wealth of correspondence, legal briefs, rabbinic opinions, and court rulings, The Shamama Case reimagines how we think about Jews, the Mediterranean, and belonging in the nineteenth century.

About the Author: is associate professor of religion, history, and law and the Ruth Ziegler Early Career Chair in Jewish Studies at the University of Southern California. She is the author of Across Legal Lines.

Department
Campus Humanities, Casden Institute, Gould School of Law, Levan Institute for the Humanities
Add this to your calendar