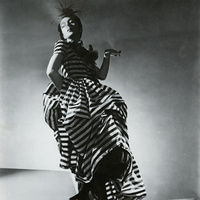 Work! traces the queer history of modeling from the rise of photographic modeling in the early 20th century to the rise of the supermodel in the early 1980s. The book charts how models have been central to the creation of a new type of sexuality in 20th century America: a commercialized form of sanitized sexuality, managed for public consumption. The book shows how the modeling industry has been shaped by queer sensibilities since its origins, and how black models-- in their very insistence on black glamour—have challenged whitestream hegemony. Work! shows how the modeling industry always has been the site of a queer structure of feeling, but one that has also always been tied to the market. In this way, Work! queers the history of capitalism.

Co-sponsored by ONE Archives