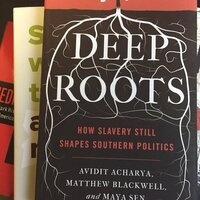 Despite dramatic social transformations in the United States during the last 150 years, the South has remained staunchly conservative. Southerners are more likely to support Republican candidates, gun rights, and the death penalty, and southern whites harbor higher levels of racial resentment than whites in other parts of the country. Why haven't these sentiments evolved or changed?

Co-written with Matthew Blackwell and Maya Sen, Avidit Acharya will discuss their groundbreaking look at the ways institutions of the past continue to sway attitudes of the present. Deep Roots demonstrates how social beliefs persist long after the formal policies that created those beliefs have been eradicated.

About the author. Avi Acharya is an assistant professor in the department of Political Science, Stanford University.  Prior to this, he taught in the political science and economics departments of the University of Rochester. He earned Ph.D. in Political Economy at Princeton University and his B.A. in Economics and Mathematics at Yale University.

NOTE TO ATTENDEES:  This is part of a conference and is the only event that is open to the larger USC community. Admission will be at 2:25 p.m.

To the conference registrants, you have automatically been registered for this book talk. No need to sign up again!