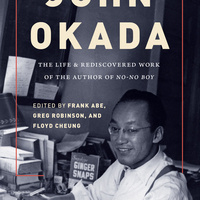 Join us as we hear from Frank Abe and Greg Robinson, co-editors of the book John Okada: The Life & Rediscovered Work of the Author of No-No Boy.  No-No Boy,  John Okada’s only published novel, centers on a Japanese American who refuses to fight for the country that incarcerated him and his people in World War II and, upon release from federal prison after the war, is cast out by his divided community. As a result of Okada’s untimely death at age forty-seven, the author’s life and other works have remained obscure. This compelling collection offers the first full-length examination of Okada’s development as an artist, placing recently discovered writing by Okada alongside essays that reassess his lasting legacy.  This volume is an essential companion to No-No Boy. For more information on the book, click here; enter the promo code WST30 to order with a 30 percent discount.

SHORT BIOGRAPHIES OF CO-EDITORS
Frank Abe is a journalist and producer/director of the PBS documentary Conscience and the Constitution. He is currently collaborating on a graphic novel dramatizing the resistance to wartime incarceration, and blogs at Resisters.com. With Frank Chin, he helped create the first “Day of Remembrance” events, and helped launch Chin’s Asian American Theater Workshop in San Francisco. Abe was senior reporter for KIRO Newsradio in Seattle, and served as communications director for two King County executives and the King County Council. He has been published in Bloomsbury Review, Amerasia Journal, Frontiers of Asian American Studies, and many newspapers.