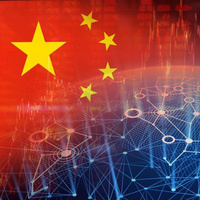 Blockchain Technology and the Film Industry in China: Paving the Way to A Global Web-Media 3.0?

The USC U.S.-China Institute invites you to a presentation with Patrice Poujol on how blockchain technology changes the way films are financed, produced and distributed in China.

China has recently embraced blockchain technology. While the government has voiced concerns over the use of crypto-currencies and banned all crypto promotions, China was mining over 80% of the Bitcoins in the world in 2018 and it is now the largest producer of crypto ATMs for export worldwide. Chinese private companies such as Baidu, Alibaba, and Tencent (BATs) have developed their own blockchain solutions, other independent companies such as NEO and TRON have developed decentralized networks in the margin of these government-run online giants. Some of these developments have direct applications in the realm of media and film.

Based on the Springer published book Online Film Production in China Using Blockchain and Smart Contracts as well as recently updated research, this talk will address the following key questions: How could such developments change the way films are financed, produced and distributed in China? How could these changes influence the creative industries beyond China?

Patrice Poujol is an ACIM Research Fellow at the City University of Hong Kong and the founder of Lumière. Dr. Poujol is an EnTech research expert and a film practitioner. He has 8-year experience in the financial sector and movie finance and 12-year experience as a creative consultant and producer in the movie industry. In 2018, he obtained the first Ph.D. worldwide on the integration of blockchain technology in Creative Media (City University of Hong Kong) through academic exchange with UCLA and participation in the MEFTI program organized by MIT. He is a member of the Hong Kong Internet Governance Forum (HKIGF) and EnTech public policy postdoctoral research fellow at the center for Applied Computing and Interactive Media (ACIM – CityU).

His book Online Film Production in China Using Blockchain and Smart Contracts was published by Springer in March 2019.