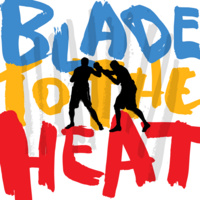 USC School of Dramatic Arts presents: Blade to the Heat

Sexuality in and out of the ring is at the heart of Oliver Mayer’s exploration of the BIPOC boxing world of the late 1950s. Toxic hypermasculinity pits three elite boxers against one another, with more than a championship belt at stake, in a world where a single word can hurt more than any blow.

Please note that the first weekend of MFA Year 3 Repertory performances has been canceled, and two new performances have been added, as indicated with an asterisk below.