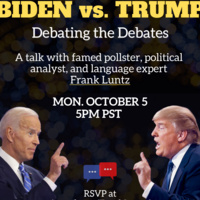 Biden vs. Trump: Debating the Debates

Join us on Monday October 5th at 5PM PST / 8PM EDT to hear from Frank Luntz on the first Presidential debate and the last month before the election.

More about Frank Luntz:
Frank Luntz is one of the most honored communication professionals in America today. “The Nostradamus of pollsters,” said Sir David Frost, while Time magazine named him one of “50 of America’s most promising leaders aged 40 and under,” and Newsweek magazine identified him as No. 24 on their Power Elite survey. His focus groups have become so influential that presidential candidate Barack Obama had this to say following the PBS presidential debate: “When Frank Luntz invites you to talk to his focus group, you talk to his focus group.”

Frank has worked for more than 50 Fortune 500 companies and CEOs, but he’s best known for political commentary. More media outlets have turned to Dr. Luntz to understand the hopes and fears of Americans than to any other political pollster. Luntz was an election night commentator on CBS in 2016, having held similar responsibilities for Fox News and MSBC in previous elections.

Dr. Luntz has written, supervised, and conducted more than 2,500 surveys, focus groups, ad tests, and dial sessions in more than two dozen countries and six continents over the past 20 years. His political knowledge and skills are recognized globally, and he has served as an election consultant and commentator in Canada, Britain, Israel, Ireland, Germany, Austria, the Netherlands, Australia, Venezuela, Ecuador (in 2020), and Ukraine.

This is the first in a series of conversations with Dr. Luntz about the 2020 election. Dr. Luntz will host one of the subsequent talks as a socially distanced forum at his famed house in Los Angeles. Please direct any questions to DornsifeDC@usc.edu