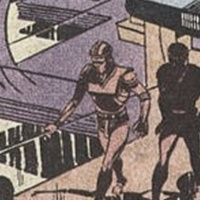 Becoming the Data Thief: Notes on a Black Speculative Mythopoetic

A (remote) keynote by John Jennings. A response by Lydie Moudileno will follow.

A part of the 2021 Comparative Studies in Literature and Culture symposium, “(In)Visible Histories: Counterhistory, Race, and Visuality.”

In 1997, Black British filmmaker and scholar John Akomfrah created a short film called The Last Angel of History. The film’s focus was around finding connections between Afrofuturism and the hybridized soundscapes of Black digital music production throughout the African Diaspora. The film used a character called “The Data Thief” as a time-traveling living lens  that served as a guide through which the story and the journey could be unpacked. The idea of a “Data Thief” is a rich and powerful prosthetic that has been echoed, in some ways, by curators and editors like Sheree Renée Thomas, Reynaldo Anderson, and Nalo Hopkinson. Visual artist and cultural activist John Jennings has often spoken of his fascination with the Data Thief as an extremely useful diegetic prototype that can help excavate long lost artifacts and create new “artifictions.” Jennings’ lecture will center around some examples of how scholars have utilized, sometimes unknowingly, the practices of Akomfrah’s time-traveling myth-maker and how the creation of a radicalized archive can help form a resistant strategy against the marginalization of Black creative culture. He will be sharing in progress ideas around his own praxis and expound upon his notions of how the speculation of other worlds, objects and entities can drive robust and complex conversations around the dearth of connective Black speculative mythologies that can empower people of African descent.

JOHN JENNINGS is a Professor of Media and Cultural Studies at the University of California at Riverside. He is the co-adaptor of Octavia Butler’s Kindred and Parable of the Sower graphic novels; co-creator of I am Alfonso Jones; co-author of Out of Sequence: Underrepresented Voices in American Comics; and co-editor of The Blacker the Ink: Constructions of Blackness in Comics and Sequential Art.

Departments of American Studies and Ethnicity, Anthropology, Art History, Comparative Literature, French and Italian, Gender and Sexuality Studies, and Latin American and Iberian Cultures; the Annenberg School of Communications and the Roski School of Art and Design; the Levan Institute for the Humanities, Polymathic Study, and the Visual Studies Research Institute.