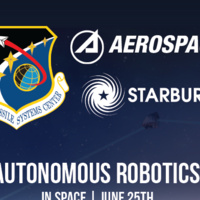 The Aerospace Corporation, Starburst, and Air Force Space & Missile Systems Center Mission Innovation Division are teaming-up this summer to bring you an event that explores the full value chain of autonomous robotics for future space missions. Given the scale and complexity of future space missions, it’s increasingly clear that much of their success will rest on robotics and artificial intelligence. Today’s marketplace is developing the technologies that will enable humans to reach higher levels of achievement and success in space. Join us in Los Angeles to hear from commercial and government speakers as well as startups as we explore the missions, technology, and people who are creating that future.

What: Autonomous Robotics in Space Conference
When: Tuesday, June 25, 2019 | 10am - 5pm
Where: Gordon Conference Center, Los Angeles Air Force Base, El Segundo CA
Who: Industry champions in robotics, future mission leaders in the DoD/IC, and investors.
U.S. Citizens Only.

All Guests must REGISTER. This unclassified event is free and is NOT open to the general public. Lunch will be provided. Contact Sarah Pannoni at sarah@starburst.aero for more information on registration.

Department
AMP SoCal
Add this to your calendar