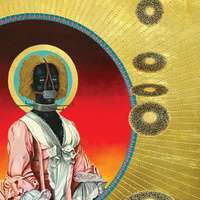 Meet exhibited artist Mark Steven Greenfield from Art & Hope at the end of the Tunnel as he discusses his inspiration and body of work. Greenfield uses his art to examine the complexities of the African American experience, both historically and in contemporary society. He explores themes such as African American stereotypes, spiritual practices, social justice, meditative practices, and abstraction offering a glimpse into the origins of both the conscious and subconscious.

A native Angeleno, Mark Steven Greenfield studied under Charles White and John Riddle at Otis Art Institute in a program sponsored by the Golden State Life Insurance Company. He went on to receive his Bachelor’s degree in Art Education in 1973 from California State University, Long Beach. To support his ability to make his art, he held various positions as a visual display artist, a park director, a graphic design instructor, and a police artist before returning to school, graduating with a Master of Fine Arts degree in painting and drawing from California State University, Los Angeles in 1987. From 1993 through 2010 he was an arts administrator for the Los Angeles Department of Cultural Affairs; first as the director of the Watts Towers Arts Center and the Towers of Simon Rodia and later as the director of the Los Angeles Municipal Art Gallery. In 1998 he served as the Head of the U. S. delegation to the World Cup Cultural Festival in Paris, France, and in 2002 he was part of the Getty Visiting Scholars program. He has served on the boards of the Downtown Arts Development Association, the Korean American Museum, and The Armory Center for the Arts, and was past president of the Los Angeles Art Association/Gallery 825. He currently serves on the boards of Side Street Projects, The Harpo Foundation, and Los Angeles Contemporary Exhibitions.

Greenfield’s work has been exhibited extensively throughout the United States most notably at the Museum of Contemporary Art of Georgia, the Wignall Museum of Contemporary Art, and the California African American Museum. Internationally he has exhibited in Thailand at the Chiang Mai Art Museum, in Naples, Italy at Art 1307, Villa Donato, the Gang Dong Art Center in Seoul, South Korea, and the Blue Roof Museum in Chengdu, PRC. He is represented by the Ricco Maresca Gallery in New York and the William Turner Gallery in Santa Monica, California. His work deals primarily with the African American experience and in recent years has focused on the effects of stereotypes on American culture stimulating much-needed and long overdue dialog on issues of race. He is a recipient of the L.A. Artcore Crystal Award (2006), Los Angeles Artist Laboratory Fellowship Grant (2011), the City of Los Angeles Individual Artist Fellowship (COLA 2012), The California Community Foundation Artist Fellowship (2012), the Instituto Sacatar Artist Residency in Salvador, Brazil (2013), the McColl Center for Art + Innovation Residency in 2016 and the Loghaven Artist Residency (2021). He was a visiting professor at the California Institute of the Arts in 2013, and was an artist-in-residence at California State University, Los Angeles in 2016. He currently teaches at Los Angeles City College.

Art and hope at the end of the Tunnel is a group exhibition curated by renowned art critic Edward Goldman; featuring dozens of artists who call the Los Angeles area home.