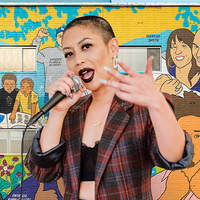 UPDATE: Though originally scheduled as an in-person event, “Art, Identity, and Power” will be presented live via Zoom.

DESCRIPTION:
Join explosive San Francisco rapper and activist Rocky Rivera, acclaimed Los Angeles–based artist and educator Audrey Chan, and USC professor and poet Adrian De Leon (moderator) for an uplifting conversation about social justice, feminism, and using art to empower diasporic communities. This inspiring discussion will be followed by a Q&A with the audience and a live performance by Rivera.

USC students who attend this online event will be able to register to receive a screen printed poster by Self Help Graphics & Art. Posters are first-come, first-served, and can be picked up on campus or sent via mail.

Bios:
Audrey Chan is a Los Angeles–based artist, illustrator, and educator. Her research-based projects use drawing, painting, public art, and video to challenge dominant historical narratives through allegories of power, place, and identity. She was commissioned by LA Metro to create a large-scale public artwork for the future Little Tokyo/Arts District Metro Station, opening in 2022. She was a Visiting Artist Faculty in the Program in Art at California Institute of the Arts and the inaugural Artist-in-Residence at the ACLU of Southern California.

Adrian De Leon is a historian, poet, and multimedia educator at USC, where he is an assistant professor of American Studies and Ethnicity. He is the author and editor of three books, most recently the poetry collection barangay: an offshore poem. His research on the histories of Filipino migrant labor has been featured in the Los Angeles Times, ABC’s Nightline, National Geographic, VICE, and Rolling Stone. Adrian is the co-host and co-writer of the PBS miniseries A People’s History of Asian America.

Rocky Rivera is a rapper and performance artist from San Francisco. Her beginnings as a journalist for publications such as Mass Appeal, The Source, and Rolling Stone inform her music, which decribes her progressive upbringing in the Bay Area and blends social justice, feminism, and West Coast–style hip hop into thought-provoking anthems with timeless appeal. Rocky has released two mixtapes, four albums, and nine joint projects with DJ Roza under the Rock & Roz series on Patreon.

Department
Student Affairs, Visions and Voices: The Arts and Humanities Initiative
Add this to your calendar