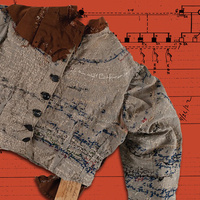 DESCRIPTION:
What kinds of secrets are tucked away in archives of past cultures, including our own? What do we hope to discover when we listen to voices that vanished for centuries? Strange scenes and stories, unfamiliar ways of speaking and thinking—or maybe something like relic feelings? In an evening of vivid performances and disturbing revelations by BLUNT RESEARCH GROUP, scholar and historian Miroslava Chávez-García, playwright Asher Hartman, writer M. NourbeSe Philip, literary historian Caleb Smith, and poet and scholar Daniel Tiffany, Archive Fever will bring to life a chorus of forgotten voices from mental asylums, teen prisons, and slave ships, as well as the intimate archive of a family crossing the border to begin a new life in California.

BLUNT RESEARCH GROUP is an anonymous collective of poets, scholars, and artists. Its work has been exhibited in museums across the country and its poetry collections have been published by Noemi Press and Wesleyan University Press. (Facebook)

Miroslava Chávez-García is the author of States of Delinquency: Race and Science in the Making of California’s Juvenile Justice System and Negotiating Conquest: Gender and Power in California, 1770s to 1880s. As a member of BLUNT RESEARCH GROUP, Chavez-Garcia's archival investigations into the Eugenics Records Collection have become part of a collaborative book of documentary poems, The Work-Shy. She is working on a history of migration, courtship, and identity as told through 300 personal letters exchanged across the U.S.-Mexico border. A professor at UC Santa Barbara, she is also co-authoring A Chicana & Chicano History of the United States with Lorena Oropeza.

Asher Hartman is an interdisciplinary artist, playwright, and director whose work at the junction of visual art and theatre centers on the exploration of the self in relation to Western histories and ideologies. Recent works include The Silver, the Black, the Wicked Dance, and Mr. Akita. (Official website)

Born in Tobago, M. NourbeSe Philip is an unembedded poet, essayist, novelist, playwright, and former lawyer who lives in Toronto and teaches at York University. She is the author of She Tries Her Tongue; Her Silence Softly Breaks, Looking for Livingstone: An Odyssey of Silence; and Harriet’s Daughter. Her genre-breaking poem Zong! engages with ideas of the law, history, and memory as they relate to the transatlantic slave trade. (Poetry Foundation bio, Wikipedia)

A professor of English at Yale University, Caleb Smith is the author of The Oracle and the Curse: A Poetics of Justice from the Revolution to the Civil War and The Prison and the American Imagination. He is also the editor of The Life and the Adventures of a Haunted Convict, by Austin Reed. (Twitter)

Daniel Tiffany is a professor in the Departments of English and Comparative Literature at USC and the author of five books of literary criticism and five collections of poetry, including The Work-Shy, published in conjunction with BLUNT RESEARCH GROUP. He has published translations from Italian (Cesare Pavese), French (Georges Bataille), and ancient Greek (Sophocles), and is a recipient of the Chicago Review Poetry Prize and the Berlin Prize. (USC faculty profile)

Presented by USC Visions and Voices: The Arts and Humanities Initiative. Organized by Daniel Tiffany (English and Comparative Literature). Co-sponsored by the Ph.D. Program in Creative Writing & Literature.