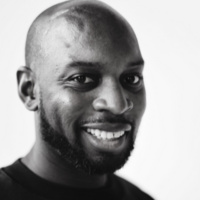 Kibwe Tavares combines his training as an architect with his love of storytelling and animation to create futuristic 3D-animated and live-action films with social and political depth, inventing detailed, vivid, and kinetic visual environments. His first short, Robots of Brixton (a thesis project for his master’s degree at Bartlett UCL), was awarded the Sundance Film Festival Special Jury Award and the 2011 Royal Institute of British Architects Presidents Medal. Fast Company named him one of the “100 most creative people in business” and he was invited to speak at TED London in 2018.

Tavares is a founding member of Factory Fifteen, a design-led creative studio that uses animation, visual effects, and emerging technologies to understand and explain the built environment. With work that spans narrative film, advertising, and architectural projects, Factory Fifteen has worked with high-profile brands including Formula 1, Samsung, Film 4, and The British Film Institute.