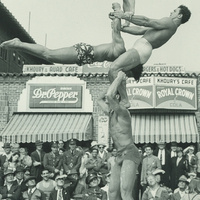 Los Angeles is home to the largest population of people of Middle Eastern origin and descent in the United States. Since the late nineteenth century, Syrian and Lebanese migration, in particular, to Southern California has been intimately connected to and through Latin America. Arab Routes uncovers the stories of this Syrian American community, one both Arabized and Latinized, to reveal important cross-border and multiethnic solidarities in Syrian California.

Sarah M. A. Gualtieri reconstructs the early Syrian connections through California, Texas, Mexico, and Lebanon. She reveals the Syrian interests in the defense of the Mexican American teens charged in the 1942 Sleepy Lagoon murder, in actor Danny Thomas's rise to prominence in LA's Syrian cultural festivals, and in more recent activities of the grandchildren of immigrants to reclaim a sense of Arabness. Gualtieri reinscribes Syrians into Southern California history through her examination of powerful images and texts, augmented with interviews with descendants of immigrants. Telling the story of how Syrians helped forge a global Los Angeles,  Arab Routes counters a long-held stereotype of Arabs as outsiders and underscores their longstanding place in American culture and in interethnic coalitions, past and present.

Sarah M. A. Gualtieri is Associate Professor of American Studies and Ethnicity, History, and Middle East Studies at the University of Southern California. She is the author of Between Arab and White: Race and Ethnicity in the Early Syrian American Diaspora (2009).