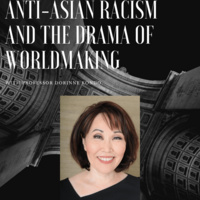 Anti-Asian Racism and the Drama of Worldmaking

Dorinne Kondo is a playwright, dramaturg, cultural anthropologist, and performance studies scholar. Her books include Crafting Selves: Power, Gender, and Discourses of Identity in a Japanese Workplace, About Face: Performing Race in Fashion and Theater, and Worldmaking. She has written three full-length plays and is working on a fourth. Kondo served as a dramaturg for three world premieres of theater artist Anna Deavere Smith’s plays, including Twilight: Los Angeles, about the 1992 uprisings. In her talk she will discuss anti-Asian violence and her concepts of racial affect and affective violence in the culture industries. Dr. Kondo will relate issues she raises in her book to racial stereotyping and inequality, including the recent disbanding of LA Stage Alliance. The Ovation Awards given by LASA mispronounced actress Jully Lee’s name and used a photo of a different Asian American actress to identify Lee.

Grounded in critical ethnographic work, Dorinne Kondo’s Worldmaking: Race, Performance and the Work of Creativity theorizes racialized labor, aesthetics, affect, genre, and structural inequality in contemporary theater. The text upends genre, interleaving analysis with vignettes and her full-length play Seamless, s comic drama about the afterlife of the historical trauma of Japanese American incarceration. The book theorizes and performs the ways the arts can remake worlds, from theater worlds to inner, psychic worlds to worldmaking visions for social transformation.

"Dorinne Kondo's work recalls us to the indispensable power of creative art and action during times when prospects for persistence are closing for so many. Brave, passionate, and always incisive, Kondo's work paves the way for those who seek to know the link between art and politics for our time."
— Judith Butler