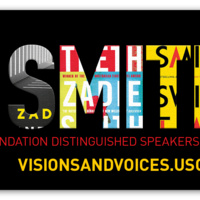 An Evening with Zadie Smith

“Smith has an astonishing intellect. She writes sharp dialogue for every age and race—and she’s funny as hell.”—Newsweek

At this special event, Smith will read from her recent work. A conversation with USC’s renowned writer-in-residence, Geoff Dyer, will follow.

Zadie Smith is the award-winning author of the novels White Teeth, The Autograph Man, On Beauty, NW, and Swing Time, as well as collections of essays such as Changing My Mind and Feel Free. She was elected a fellow of the Royal Society of Literature in 2002 and listed as one of Granta’s 20 Best Young British Novelists in 2003 and 2013, and is a tenured professor of fiction at New York University and a member of the American Academy of Arts and Letters.

Born in North London in 1975 to an English father and a Jamaican mother and graduated from Cambridge in 1997, Smith wrote a short and timely series of reflective essays, Intimations, during the early months of lockdown. “Smith does more than illuminate what we’re going through,” according to John Powers of NPR’s Fresh Air. “She teaches us how to be better at being human.”

Geoff Dyer is the author of Jeff in Venice, Death in Varanasi and three previous novels, as well as nine non-fiction books. Dyer has won the Somerset Maugham Prize, the Bollinger Everyman Wodehouse Prize for Comic Fiction, a Lannan Literary Award, the International Center of Photography’s 2006 Infinity Award for writing on photography and the American Academy of Arts and Letters’ E.M. Forster Award. In 2009 he was named GQ’s Writer of the Year. He won a National Book Critics Circle Award in 2012 and was a finalist in 1998. In 2015 he received a Windham Campbell Prize for non-fiction. His books have been translated into twenty-four languages. He currently lives in Los Angeles where he is Writer in Residence at the University of Southern California.