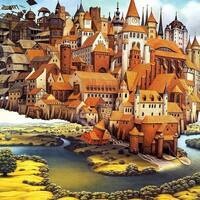 Coming soon to The Wende Museum! Alternative Realities: Utopian Thought in Times of Political Rupture. A two-day conference organized by The Wende Museum, the Max Kade Institute for Austrian-German-Swiss Studies at USC, and the Centre for Contemporary History, Zentrum für Zeithistorische Forschung Potsdam (ZZF). When: April 16-17, 2018
Where: The Wende Museum, Culver City, and the Doheny Memorial Library at the University of Southern California, Los Angeles
Tickets: Please click here

Recent history, the so-called Age of Extremes, has been marked by constant war, revolutionary upheavals, and sudden political shifts that have shattered existing structures and abruptly called prior assumptions into question. Such moments of rupture pave the way for the imagination of a new order. This conference focuses on the key role of utopian visions, both artistic and intellectual, that changed the world from the beginning of the twentieth century to the present day.

In what ways did these utopian fantasies lead to direct political change? What was the role played by artists, writers, filmmakers, intellectuals, and visionary political thinkers in shaping new horizons and offering alternative models? How did artistic avant-gardes, science-fiction novels, experimental films, and utopian communities embody new social visions, structures, and practices?

We explore, in short, the power of alternative visions of reality in modern and contemporary history.