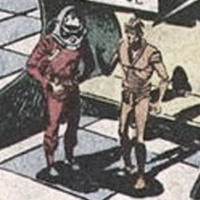 A (remote) keynote by Qiana Whitted. A response by Zakiyyah Iman Jackson will follow.

A part of the 2021 Comparative Studies in Literature and Culture symposium, “(In)Visible Histories: Counterhistory, Race, and Visuality.”

Published in 1947, All-Negro Comics is celebrated as the first comic book written and illustrated by African Americans in the United States. Only issue #1 of the series appeared on newsstands, featuring a full-color anthology of crime, adventure, fantasy, and humor stories that were created to disrupt the popular and profitable racial caricatures of the day. Qiana Whitted’s talk takes a closer look at the publication’s significance — as a counter-history to the comics industry’s so-called Golden Age and as a requiem for the issues of All-Negro Comics that never made it to print. We will consider what we can learn from the inaugural characters, including detective Ace Harlem, whose frequent awestruck observations are forever anchored to the moment of his debut: “This is certainly a new one to me!” Along the way, Prof. Whitted will explore the tropes of incompatibility, misalignment, and peculiarity that are central not only to the comic book’s storytelling, but also to its material significance as a visual narrative of race.

QIANA WHITTED is a Professor of English and African American Studies and the Director of African American Studies at the University of South Carolina. She is the author of EC Comics: Race, Shock, and Social Protest, the co-editor of Comics in the U.S. South, and the author of A God of Justice?: The Problem of Evil in Twentieth Century Black Literature.

ZAKIYYAH IMAN JACKSON is an Assistant Professor of English at the University of Southern California. She is the author of Becoming Human: Matter and Meaning in an Antiblack World.

Departments of American Studies and Ethnicity, Anthropology, Art History, Comparative Literature, French and Italian, Gender and Sexuality Studies, and Latin American and Iberian Cultures; the Annenberg School of Communications and the Roski School of Art and Design; the Levan Institute for the Humanities, Polymathic Study, and the Visual Studies Research Institute.