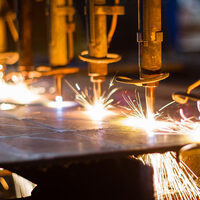 Humans have long wondered if there were worlds around other stars and maybe life on those worlds. Over the last two decades, astronomers have found that the answer to the first question is a resounding YES! In fact, planets around other stars (exoplanets) are amazingly common. On average, there’s at least one planet for every star in the Milky Way galaxy, meaning over 100 billion planets in our galaxy alone. Even better, the exoplanets discovered are surprisingly diverse, with exotic types that we don't have in the solar system – blazing hot Jupiters, mini-Neptunes, super-Earths. We've also discovered Earth-size exoplanets orbiting in stellar “habitable zones”. A habitable zone is the range of distances from a star where a rocky planet like Earth might have liquid water on its surface, which is a key ingredient for life. Earth is unique in the solar system because its surface life is so abundant that it has changed the planet’s whole atmosphere. For example, the oxygen we breathe comes from photosynthetic organisms (green plants). With the right tools and techniques, we have a chance of seeing such signs of life on a planet around another star. Right now, it's hard to measure much more about an exoplanet than its orbit, mass, and/or size. Probing the atmospheres and surfaces of Earth-size planets around Sun-like stars is not yet possible – but could be in the coming decades. I'll discuss how astronomers can study exoplanet atmospheres, challenges in the search for Earth 2.0, and prospects for future discoveries using space-based telescopes.

A team of scientists and engineers has developed a concept for a “super-duper Hubble” called LUVOIR. The key goals of this possible future space telescope are to find dozens of Earth-size planets in the habitable zones of stars like our Sun and probe those worlds for signs of water and life. The presenter will share a few highlights from our 2019 Final Report on the LUVOIR concept study, and provide a glimpse into the early stages of developing a future NASA Great Observatory.

Please click the link below to join the webinar:

Dial(for higher quality, dial a number based on your current location):

Department
AMP SoCal
Add this to your calendar