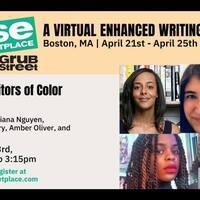 Join a lively and vital discussion among prominent authors, literary agents, and editors of color as we share experiences of issues we've uniquely encountered in our projects and our careers. Get advice on what you might expect in your own career and how to navigate it. The talk will build on ideas discussed in previous Writers of Color Roundtable, but all attendees are welcome!

Jonathan Escoffery is the author of If I Survive You, a collection of humorous and harrowing linked stories following a Jamaican-American family as they seek stability upon moving to Miami, navigating cultural dislocation, tenuous family ties, and the many, conflicting meanings of Black American identity, forthcoming fall 2022 from MCD/ FSG, as well as the forthcoming novel, Play Stone Kill Bird. He is the winner of the 2020 Plimpton Prize for Fiction, the 2020 ASME Award for Fiction, and a 2020 National Endowment for the Arts Literature fellowship. His writing has appeared in The Paris Review, American Short Fiction, Electric Literature’s Recommended Reading, ZYZZYVA, Pleiades, AGNI, The Best American Magazine Writing 2020, and elsewhere. Jonathan earned his MFA in Fiction from the University of Minnesota and attends the University of Southern California’s Ph.D. in Creative Writing and Literature Program as a Provost Fellow.

Lisa Lucas is the publisher at Pantheon and Schocken Books. Previously she was the executive director of the National Book Foundation.

After dropping out of the University of Albany in 2015, Kiki Nguyen had her first publishing internship with Wunderkind PR. There, she discovered a practical industry for her codependent love of fiction. In 2016, Kiki went on to intern with DMLA where she soon joined the team full-time as an assistant literary agent. Kiki is now building her client list within young adult and adult fiction with a focus on queer and BIPOC authors. When not working, she is playing Among Us or shouting about film/tv on Twitter.

Amber Oliver is an editor at Penguin Random House. Amber has published Lambda Literary Award winner, Claire O’Dell’s A Study in Honor and The Hound of Justice and has forthcoming titles such as Robin Page’s Small Silent Things, Lee Matalone’s Home Making, Shayla Lawson’s This is Major, Morgan Jerkins’s Wandering in Strange Lands, and Yaffa S. Santos’s A Taste of Sage. Amber is also a 2019 Publishers Weekly Star Watch Honoree. She was born and raised in the Bronx, is a graduate of the City College of New York, and is committed to uplifting marginalized voices and acquiring literary fiction and upmarket commercial fiction that is well-written, culturally relevant, and totally engrossing.

Aemilia Phillips joined Stuart Krichevsky Literary Agency after completing the Columbia University Publishing Course. She graduated from Harvard University with high honors, and is putting her English degree to good use in the world of publishing, working with a range of fiction and non-fiction writers. She’s young scrappy and hungry, and is particularly interested in writers who push conventional boundaries in order to address cultural, political, and social justice issues. With family on both sides of the Mexican border and interests in journalism, narrative non-fiction, and literary fiction, she looks for diverse, smart writing with an impactful story to tell.